Ugly Mockups: How We Started

Why Create ForceRank talked about the problem we were trying to solve with this product. So how did we think we'd actually do that? How do you turn an idea into a reality? Here were our big goals.

The site should be simple. Simple. Simple. One focus. No bells and whistles. We are big admirers of Doodle.com and we wanted it to feel just that easy. This lead to our second goal.

Get to Dog Food

Only build features that you must have in order to get as quickly as possible to the dogfooding stage.

Starting in our spare time we wanted to make sure that we didn't put anything in the way of forward progress. That's why we instituted our policy of "No No's", which means that the answer to "can I ..." is always yes. "Can I rip out the pricing page you did and totally redo it?" "Can I change the company logo?"  "Can I publish this blog post?" The answer is always yes.

Pretty much the current dogma, but it's dogma because it's right. Scratching one's own itch certainly helps in this regard because it means you can overlook lots of potholes as you try to solve your problem.

This is no doubt controvertial for some and we've already got great feedback from some people which basically amounts to "omg this is great! why are you hobbling yourself my charging money for this? this could be huge!!" But the fact is we aren't aiming for huge. We're aiming for really frigging useful. I don't want to solve anything remotely related to scale unless it's clear we've solved the fundamental problem first.

So how do you actually start?

Well, you Sketch some things. And let these sketches be ample proof to all that you don't need a designer on day 1. Look at that horrid gradient! Look at those misaligned edges! No big deal. 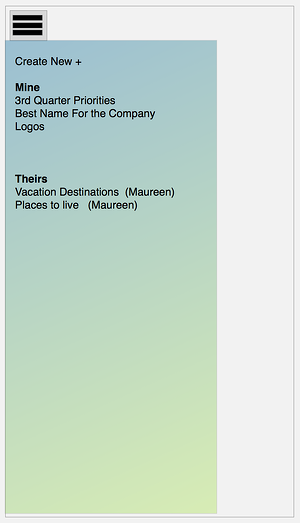 You can see some horrible mobile-ish design in that first screenshot. It's horrible, because honestly I stopped using Sketch pretty early on. One thing I found was that responsive design was really much much harder in Sketch than just doing it live in HTML with Foundation. Responsive is just it's own thing. Maybe real designers have better tricks about how to think about the same design in 3 different widths at the same time, but it made my head hurt and doing static mockups in HTML and then dragging the window around to see how it responded felt so much easier.

That said, Sketch was great about helping me understand how the voting and reports pages would work. 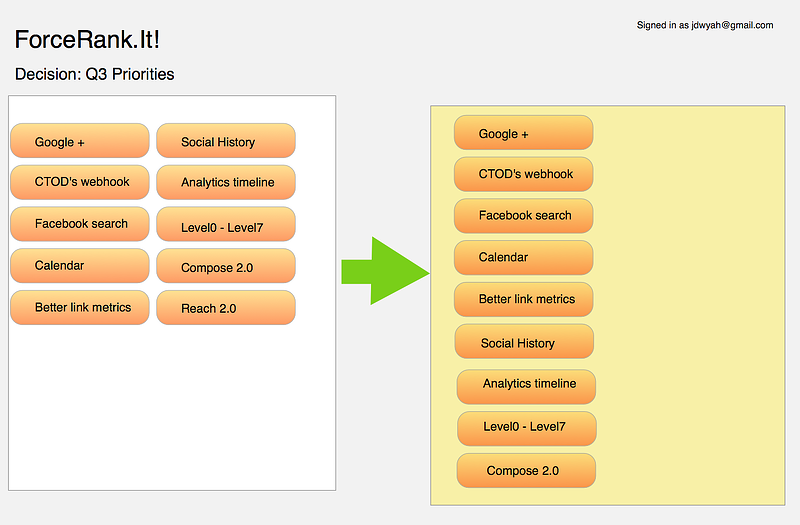 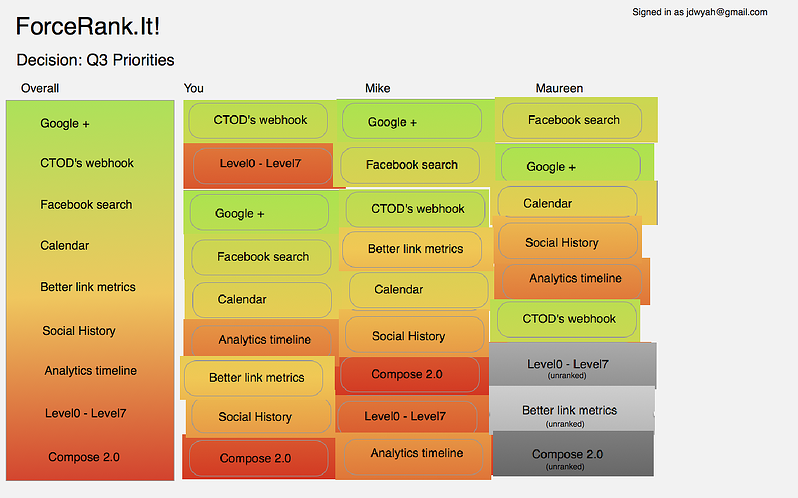 This was probably the most important page to get right. If you ask three coworkers to vote on their priorities, you'd better deliver something useful. As you can read about in Why Build a Saas? I'd used color to help pull out the discrepancies between responses in my spreadheet. What wasn't clear to me, without mocking things up, was whether this was going to work at all for larger groups.

Should we show each choice in the order of the overall results, then what ranking each voter gave the choice?

I decided that was confusing, because there was no way to see the rankings of each individual. Instead I hit upon the solution you see above. Show each user's rankings in the order they ranked them. But use the color coding from the overall results.

I think this works pretty well. The "You" vote for "Level 0 - Level7" above clearly jumps out as being an outlier. Also the grey boxes work to show that Maureen didn't vote on everything.