Why Did We Create This?

So one day I sat down and thought "you know what? I want to spend a lot of time trying to start a business that will most likely fail because #entrepreneurship". No wait, that's not what happened at all. Let's try again.

So one day I sat down and thought, "you know what? the world needs another small SaaS company!" No wait, it's not that either. Hmph.

So one day I sat down and thought, "Dammit we have like 10-15 different important projects and they're all good, but I can't tell how the rest of my team ranks them in importance and I think this lack of clarity on priorities is slowing us down because we're scattered." Ah that's it.

Coincidentally it occurred to me that this was not the first time I'd had this thought this. You might say "well, why don't you just ask your team?" and you'd have a strong point and of course I did, but I think there's something wishy washy that happens when we just talk about priorities. Have you had that happen? Here are my three experiences with prioritization.

The Cabal: You get lunch with your co-worker to chat big picture. You have a great big floating discussion about the market. Right about at the end of lunch you are both excited that the new analytics tool is really the most important thing and you decide that's #1 to increase your NPS score. As you walk back to the office, one of you says "of course I also think the new publishing tool and email notifications are going to be what drives growth".  And once again the priority list gets a bit hazy. Also the rest of the team may be on a totally different page.

The Stakeholders: You end up in a room with, "the stakeholders". Hopefull this is < 5 people, but we all know that sometimes this turns into 8 or 12. Oh and someone brings a talkative intern to watch. Four hours later everything gets tabled until you can all meet again in three weeks.

The Spreadsheet: The was one time when I'd felt a burning need to compare an endless number priorites with my Product Manager and I'd come up with a hacky spreadsheet that had really helped. It wasn't perfect solution. It was exceedingly finicky and a bunch of work, but it had produced some really interesting insights.

Basically what I did was list out all of the 40-odd possible projects that were floating around. Then I "forced" us to "rank" them. (You can see where I'm going here)  After that I did some spreadsheet math to calculate which ones were highest as well as the "relative overweighting" of each option. By highlighting the relative overweighting I was able to highlight the disagreements. It's not easy to read, but you can see in the image below that we had, astonisghingly the exact same rankings for #1, #4 and #6. Yet my #5 was her #42.  Sounds like that's an important disagreement to highlight to understand why something I thought was important she thought was next to useless. 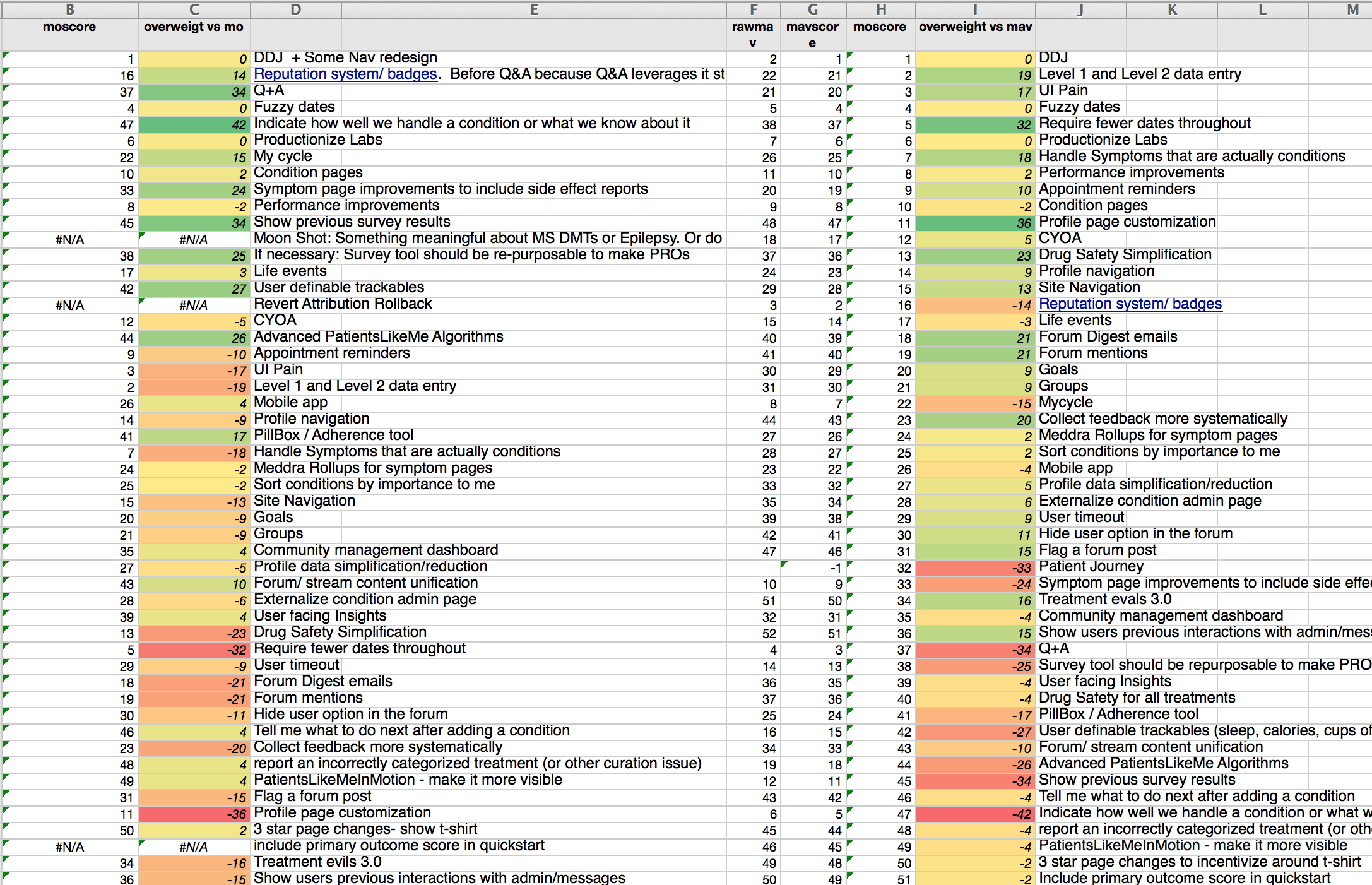 Back to the problem at hand

But I loved what this spreadsheet did. It didn't just pick a winner, it showed me at a glance the differences and similarities between our thinking. I think we learned much more from the major disagreements than from the agreements.

Insights like these are what I wanted from my team and the intuition that we could build a simple tool to quickly help teams compare priorities is why we built ForceRank.

Now the trick is just building it...

Continue reading about how we actually built the tool here: Building ForceRank.it